From the mid 1970's blotter has been the most available form of LSD. There are likely two main reasons for this: Firstly, after LSD was made illegal in the US (in 1967) mandatory minimum sentencing was introduced. Sentences were determined by the weight of the substance with which offenders were caught. If someone had LSD on a sugar cube weighing 1g then the sentence was the same as for an individual caught with 1g of crystal LSD (representing approx 10,000 LSD doses rather than just 1). The move to lightweight LSD blotter therefore reduced sentences. Secondly: There were many high profile busts in the late 60's and early 70's, during which pill presses were seized, LSD blotter was therefore more convenient for many to make.

Over the years Blotter Art has developed as a field in its own right, with images ranging from multiple repeats (so each trip has a complete image), to complex images spanning a whole sheet. Images have typically been psychedelic in nature, or relied heavily on cartoon images. Occult and religious symbols have also been widely used. There is also a distinct sub-category of satirical Blotter Art, including images such as "Gorby" and "FBI". This imagery originally served as an identifier of different batches of LSD, a form of "trademark". No trademark was ever bigger than BEL's Orange Sunshine, which has been recently commemorated in blotters and posters.

There are distinctions within Blotter Art. Some iconic original print images have been circulating since the 70's (Eg: Hofmann's, Eye of Horus, Knights of Malta). Other art work is dubbed "Vanity Blotter Art." This is art as a collectible and has never been dipped.

Signed blotters should have photographic proof of signing and "proof of life." As a result of the growing popularity of the art-form, and high prices generated, Blotter Art is sometimes counterfeited. Another concern is the reproduction of copyrighted images and logos without the consent of the artists, organizations, or subjects. Respect the artists; honor their works with fair trade.

Don't Be Vain
Ask before you print. Inquire before you're a buyer.
Counterfeits ruin the market. But "the marks are wising up." 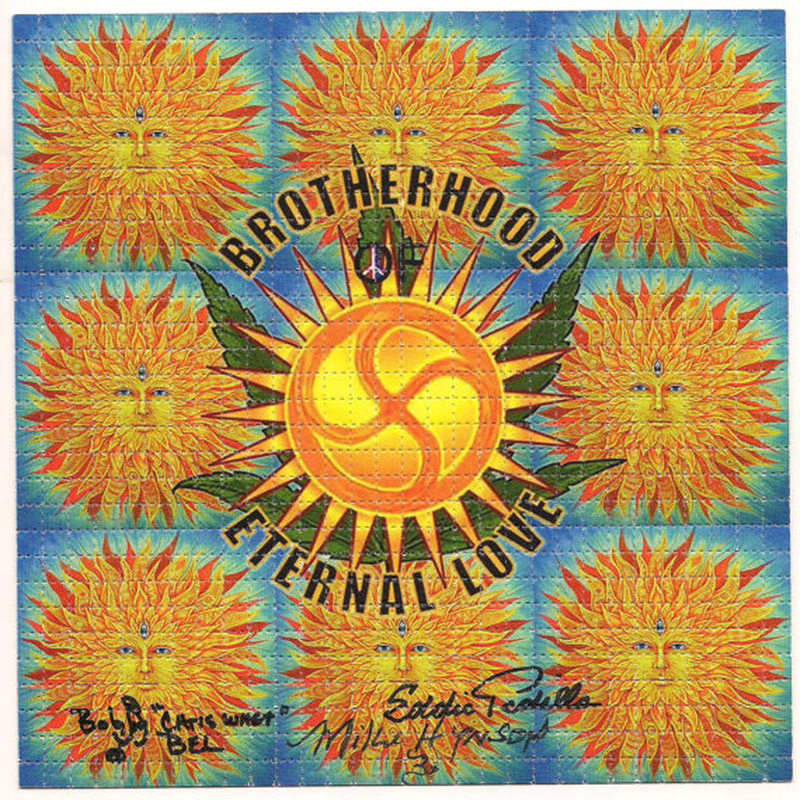 ..The group known as ‘The Brotherhood of Eternal Love’ a gang of hippie surfers affiliated to and led by Leary, espoused a communal, free love lifestyle based in Laguna Beach. They had a vegetarian outlook, opening a cafe where no prices were given and diners chose to pay what they felt reasonable. Many of the group became involved in selling contraband and suffered the considerable ire of the establishment, who made their final arrest of the group in 2009. It is thought that ‘The Hippy Mafia’ were responsible for bringing wholesale amounts of pot from a myriad of countries including Mexico, Lebanon, Afghanistan, Nepal and Pakistan, helped in part by the Welshman Howard Marks.

Whether the millions of dollars the narcs thought the group made ever materialized is unknown. There is no way to "follow the money", beyond the laundry. Leary said of them, "The whole concept of the Brotherhood of Eternal Love is like a bogeyman invented by the narcs. The brotherhood was about eight surfer kids from Southern California, Laguna Beach, who took the LSD, and they practiced the religion of the worship of nature, and they’d go into the mountains. But they were not bigshots at all. None of them ever drove anything better than a VW bus. They were just kind of in it for the spiritual thrill.” But then he would say that. The group has become a part of surfing's collective unconscious and folklore, referenced in ‘Point Break’, and ‘Big Wednesday’, 'Savages', and more. http://belhistory.weebly.com/laguna-beach.html 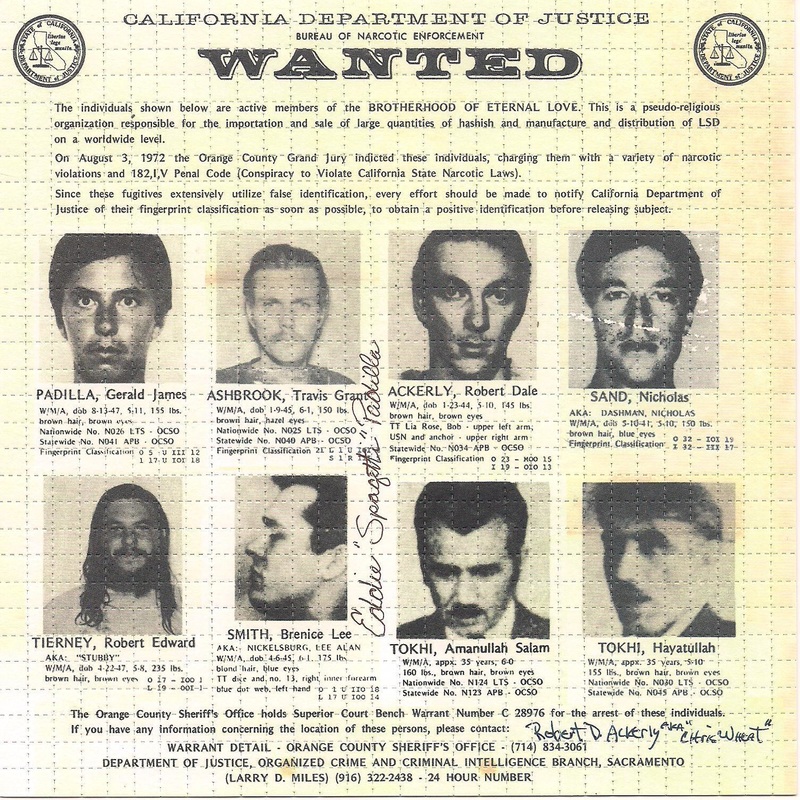 This is an Original LSD Blotter Art Sheet Of "THE BROTHERHOOD OF ETERNAL LOVE" From The Original 1972 Wanted Poster . It Is Vary Rare To Even See One Of These Wanted Posters, Let Alone Have A Chance To Own A Peace Of LSD History. This Is A True Story Of A Group Of California Suffers, Dubbed 'THE HIPPIE MAFIA" Who Grew Into a World Wide Drug Cartel In The Late 60s and Early 70s, Whose Homemade Acid "ORANGE SUNSHINE" Provided The Fuel For Americas Psychedelic Counterculture Revolution. Read About The Roller Coaster Ride Through SEX, DRUG SMUGGLING and ROCK and ROLL Adventures.

It Is Now Known That 75% Of All The LSD Users In The World Have Used ORANGE SUNSHINE. They Didn't Do It For The Hundreds Of Thousands Of Dollars They Made. They Did It To Change The Mind Set Of The Youth Of The World And To Make The World a Better Place. Check Out EDWARD PADILLA's Book about His Escape For The World's Foulest Prison In Peru Or Watch Him Tell hIs Story On the NATIONAL GEOGRAPHIC Show LOCKED UP ABROAD .This Blotter Art Sheet Has Not Ben dipped Or Near Any Drug. The Size 7 1/2 X 7 1/2. 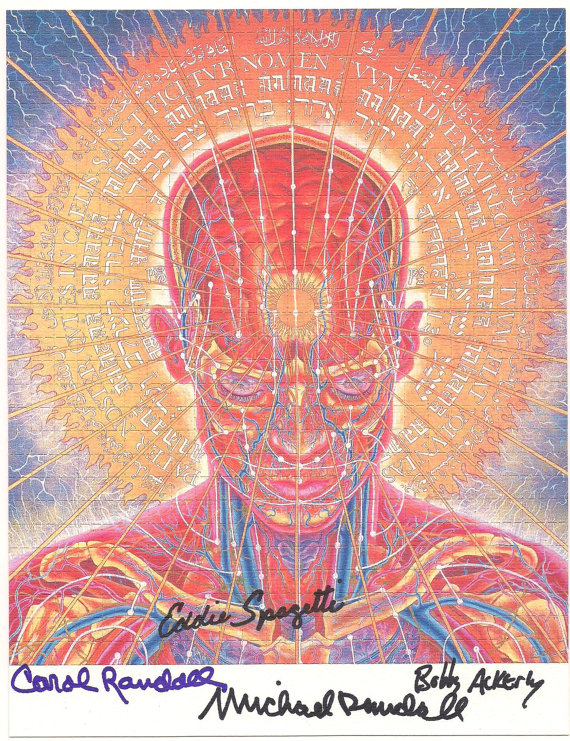 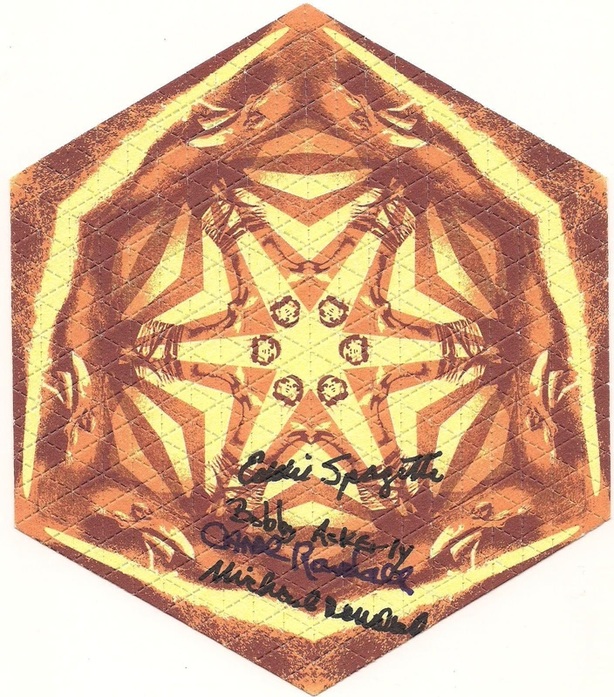 This is The Original " VINTAGE LSD BLOTTER ART SHEET " SOUL SURFER " SIGNED BY 4 BROTHERHOOD OF ETERNAL LOVE FOUNDING MEMBERS. MICHAEL and CAROL RANDALL , Who Personally Handled Over 1 Million Hits Of ORANGE SUNSHINE . BOBBY BEL The Number One Connection For Northern California and EDDIE PADILLA. Who Has Is Own Book Out About His Escape From The Foulest Prison In The World .
Watch His Story On The National Geographic Channel, "LOCKED UP ABROAD

"ONLY 3 IN THE WORLD  One Has Been Sold, One Is In  My Collection , And One For Sale Here. YOU WILL NEVER SEE ANOTHER ONE. If You Have Not Read The Book "ORANGE SUNSHINE" Just Wait For The Movie That Should Be Released This Year. At a testimonial dinner for the Shulgins in 2010 at the Maps conference in San Jose Ca,  The underground chemist and a member of "THE BROTHERHOOD OF ETERNAL LOVE",  NICK SAND who is often credited with the invention of ORANGE SUNSHINE LSD, Revealed that in 1966 after LSD was made illegal in California the precursors required for creating LSD under the methods of the day dried up,  And for a short time LSD actually disappeared.

At that time NICK SAND and TIM SCULLY were given a formula for a new method of manufacturing LSD that got around the constraints of the old method, They were told that it was from a friend and at the time this ally could not be revealed. At the Maps dinner for the SHULGINS in 2010 in a startling revelation NICK SAND identified that mysterious Friend as SASHA SHULGIN. This means that along with popularizing MDMA, and inventing literally hundreds of  Psychedelic compounds SASHA was also the inventor of ORANGE SUNSHINE LSD which has been estimated as used by 75% of the world's LSD users.

So while ALBERT HOFMANN invented LSD ,it can now be said that it was thanks to ALEXANDER "SAHSA"  SHULGIN,and the bravery of NICK SAND ,TIM SCULLY and "THE BROTHERHOOD OF ETERNAL LOVE" that it was available from 1967 and to this day. SASHA SHULGIN IS THE ONE AND ONLY" PSYCHEDELIC GODFATHER"

These sheets are DRUG free blotter paper,
using a offset litho printing press with 100% soy based Ink . So the best process available in the world.  These sheets look and feel like Blotter Art Should ! This sheet has not been near or dipped in any drug.
"Please Note This Is For Serious Collectors Only ". 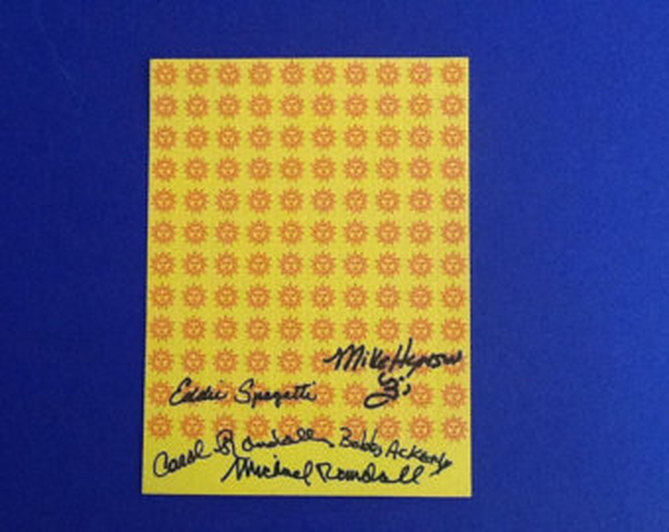 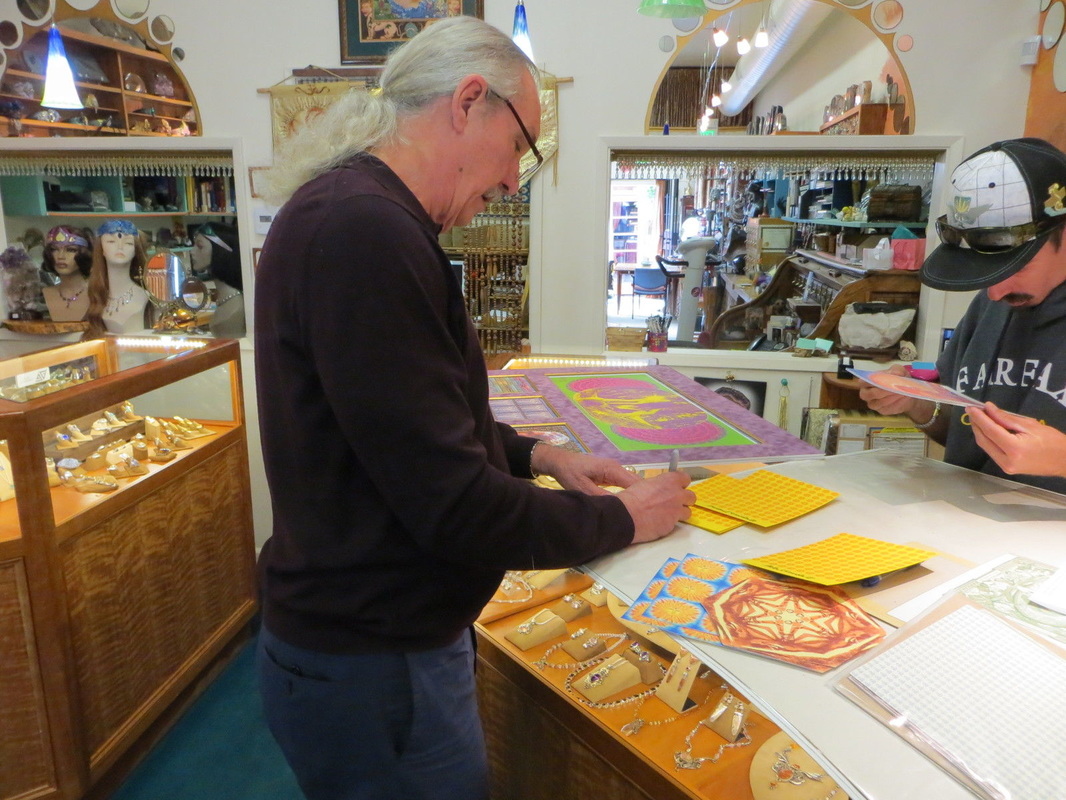 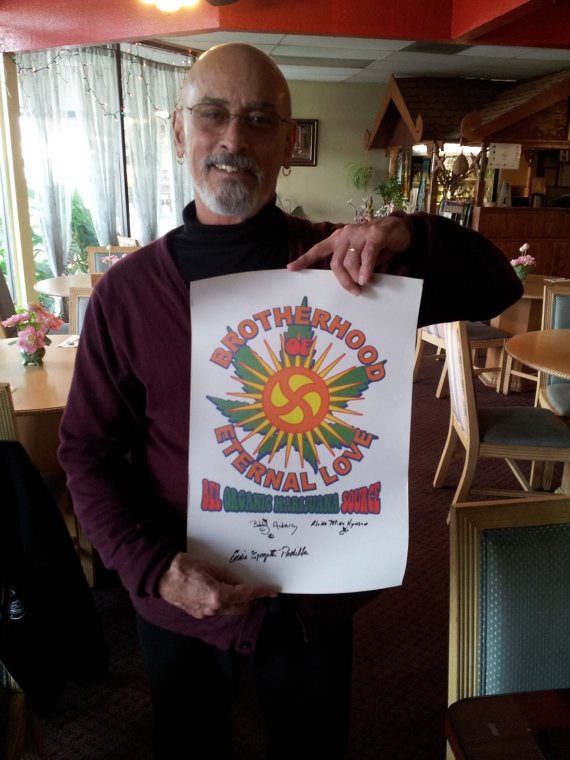 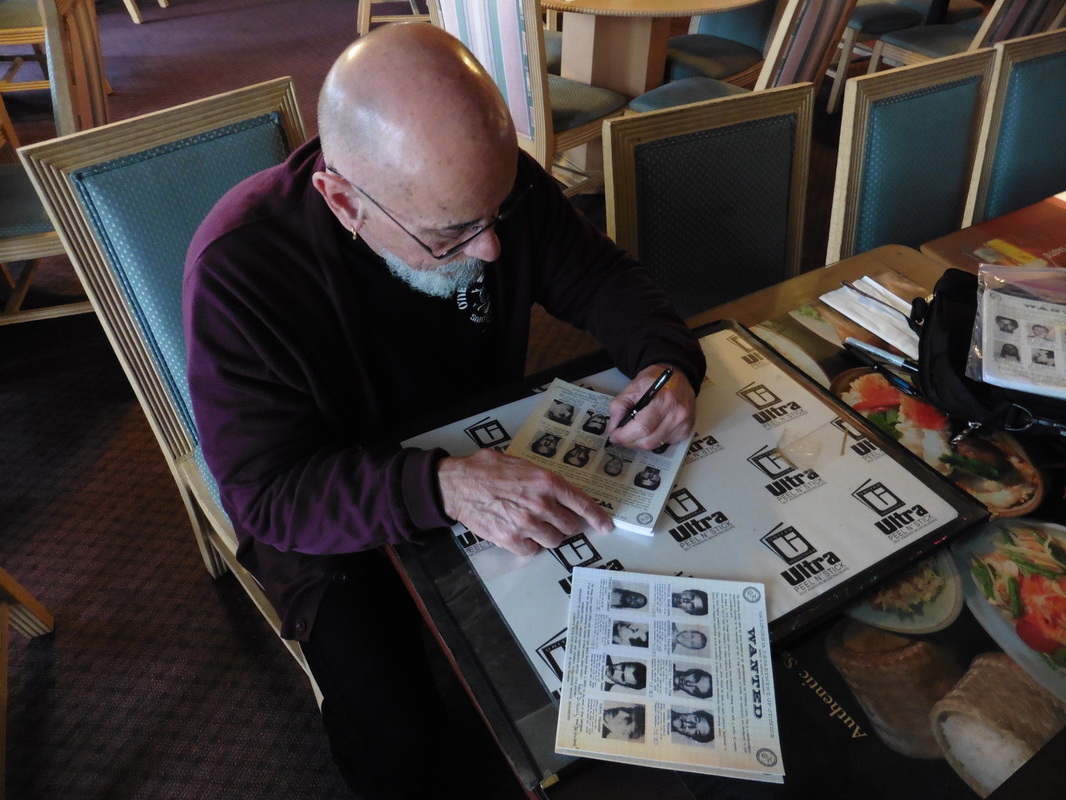 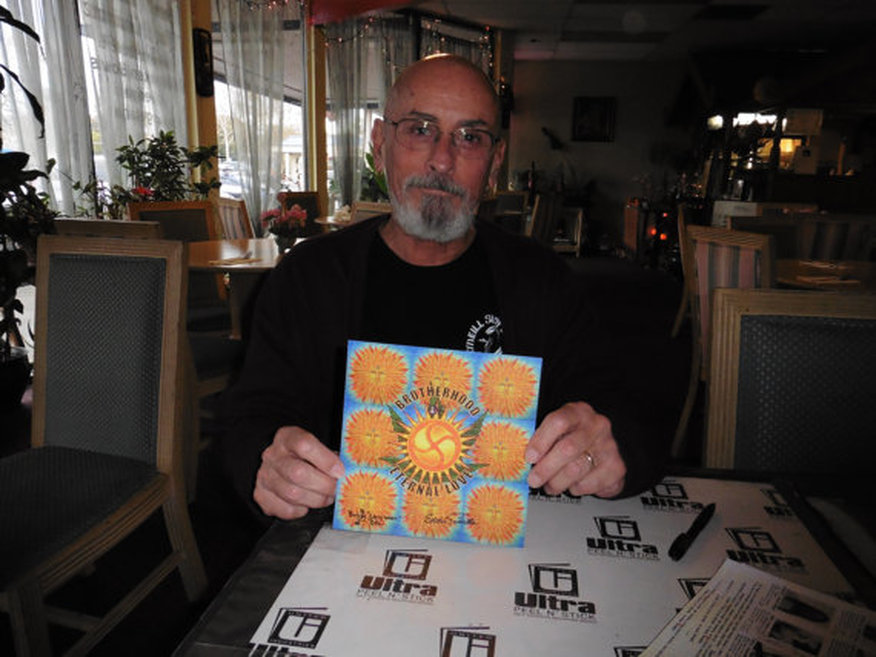 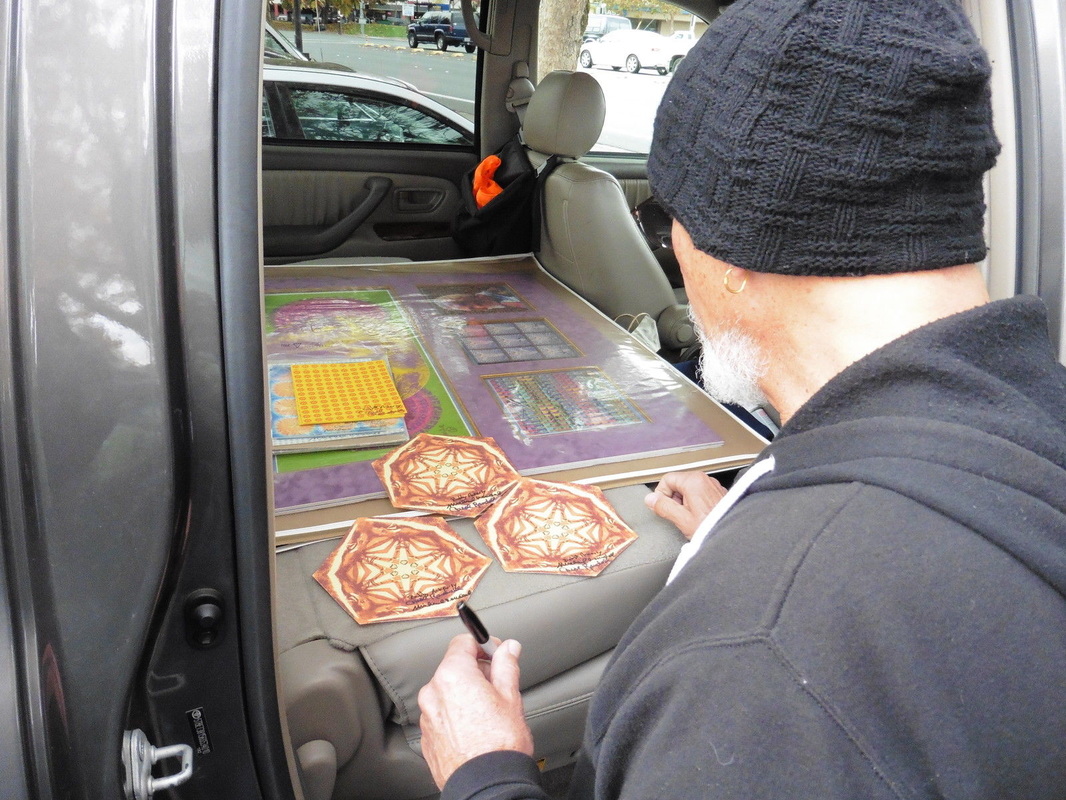 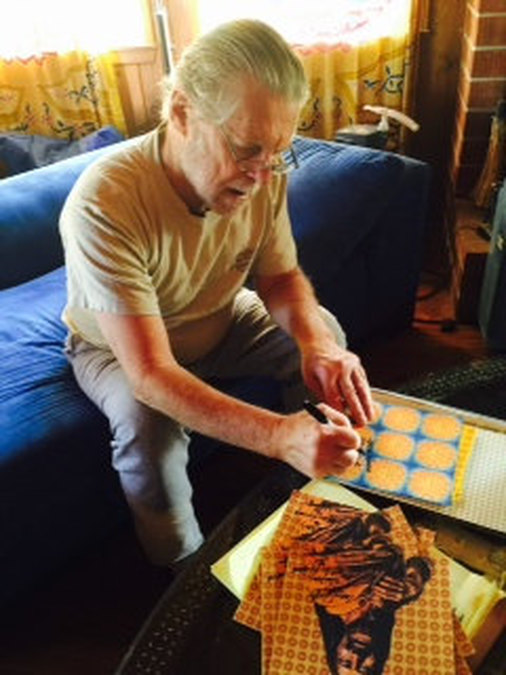 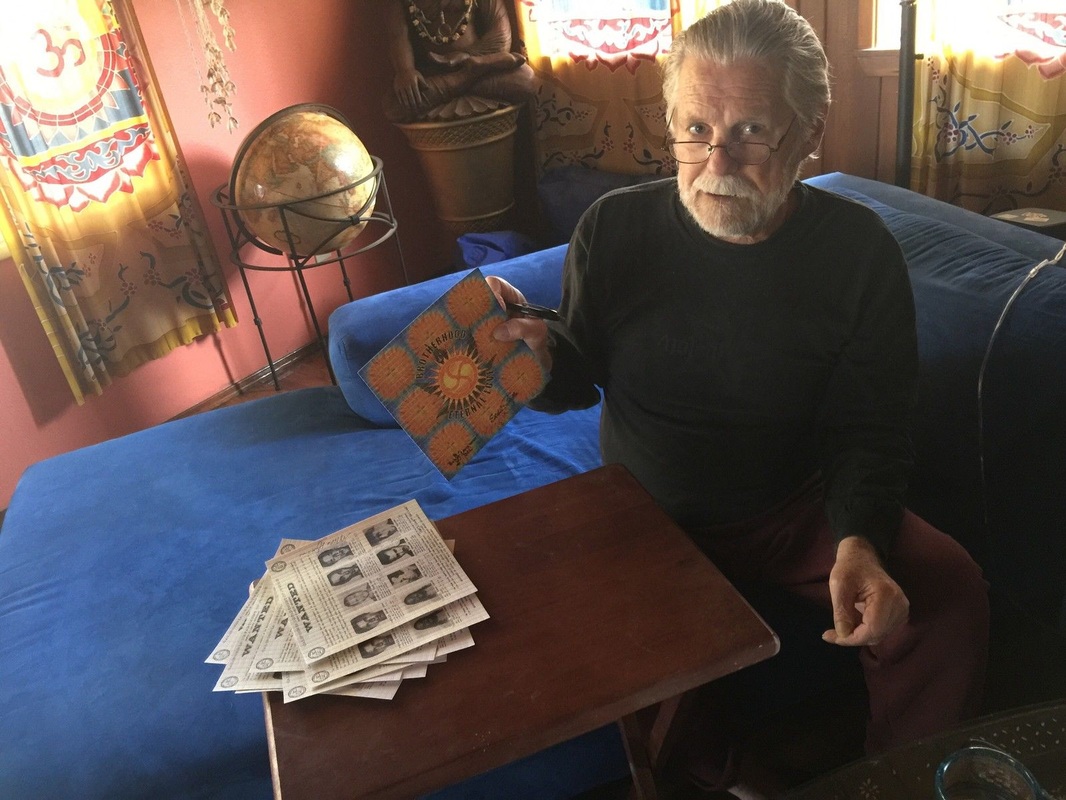 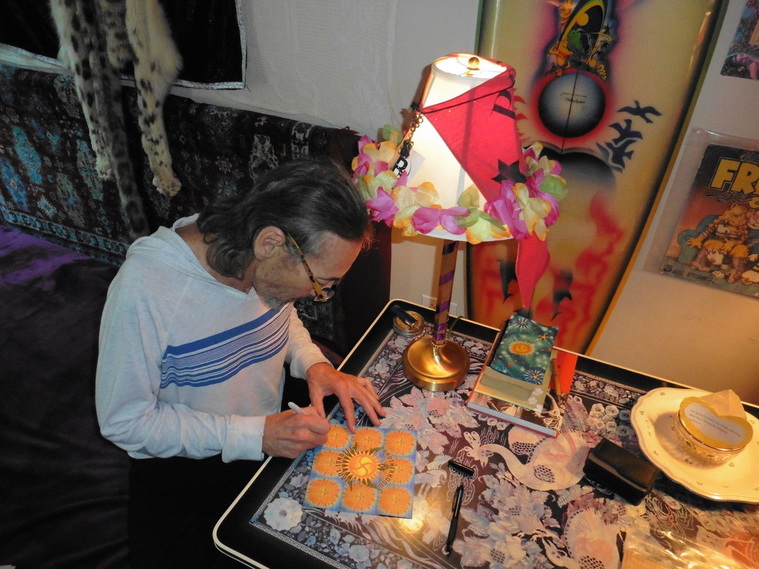 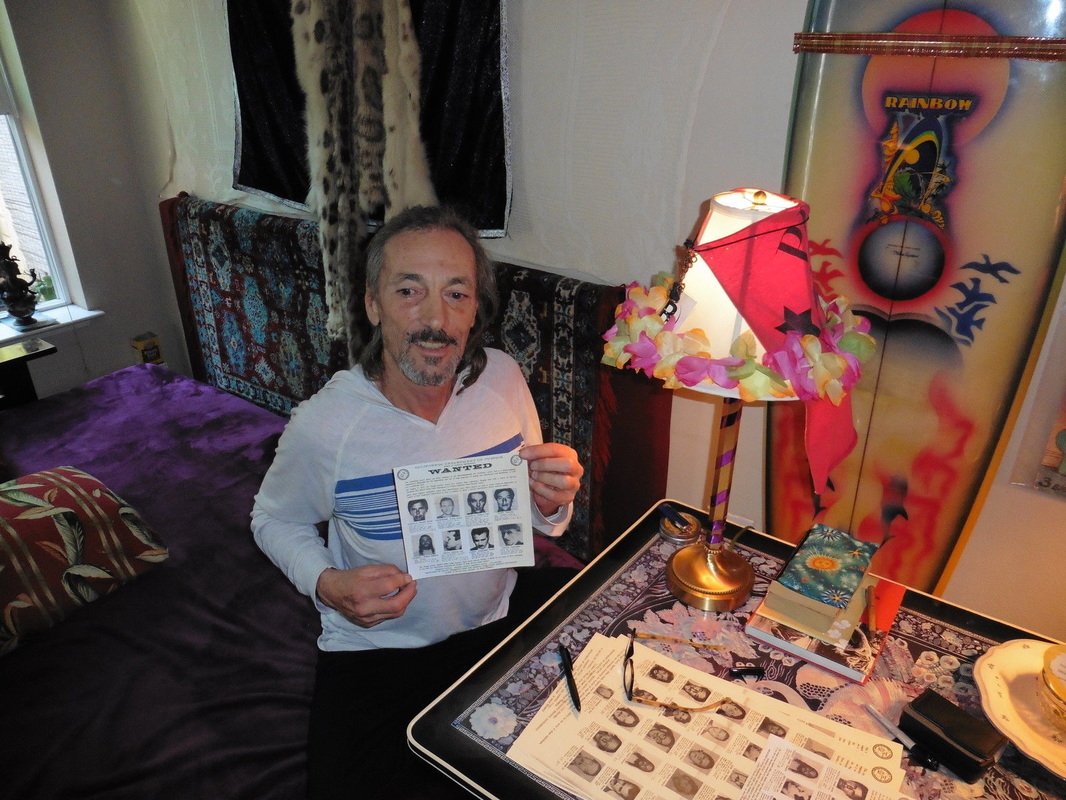 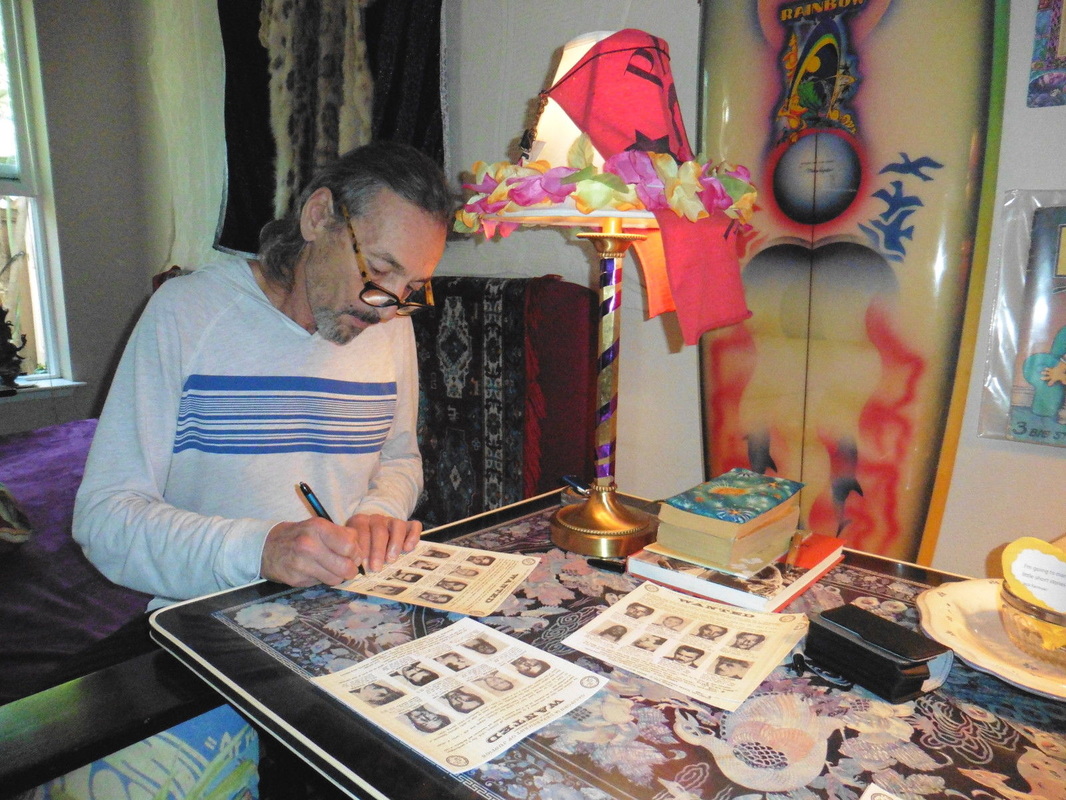 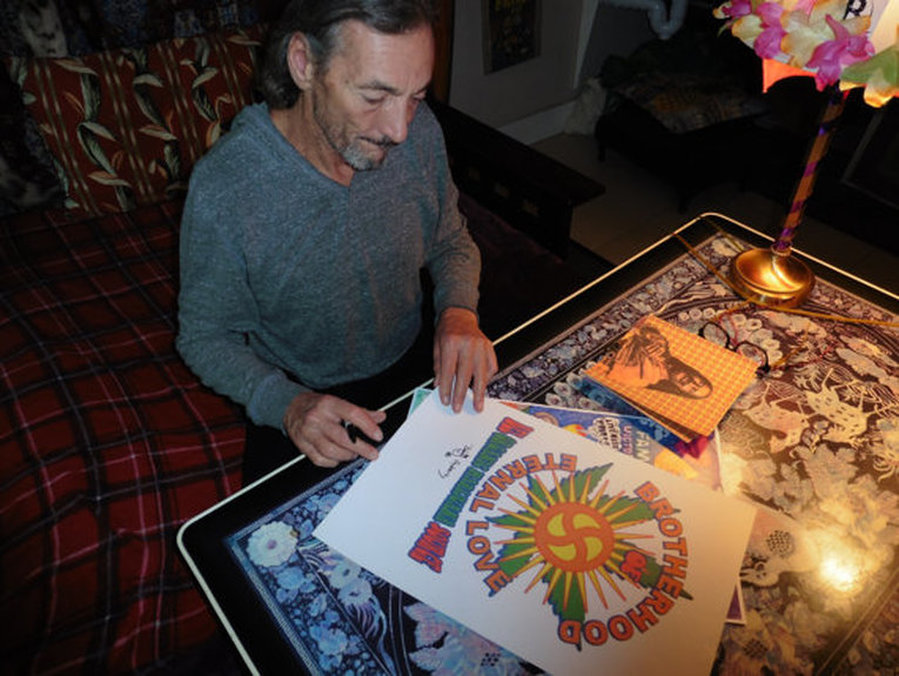 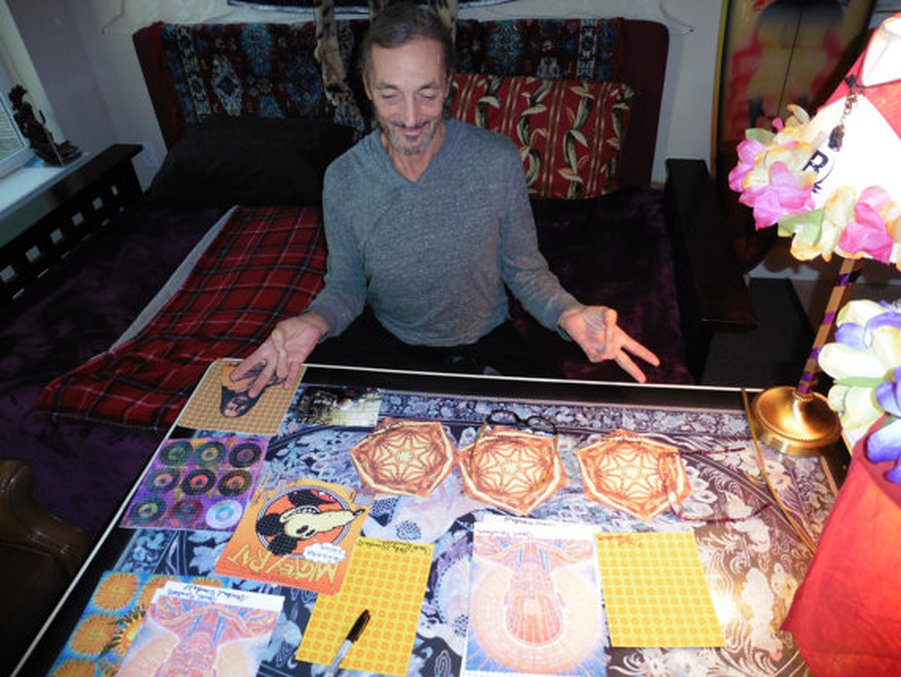 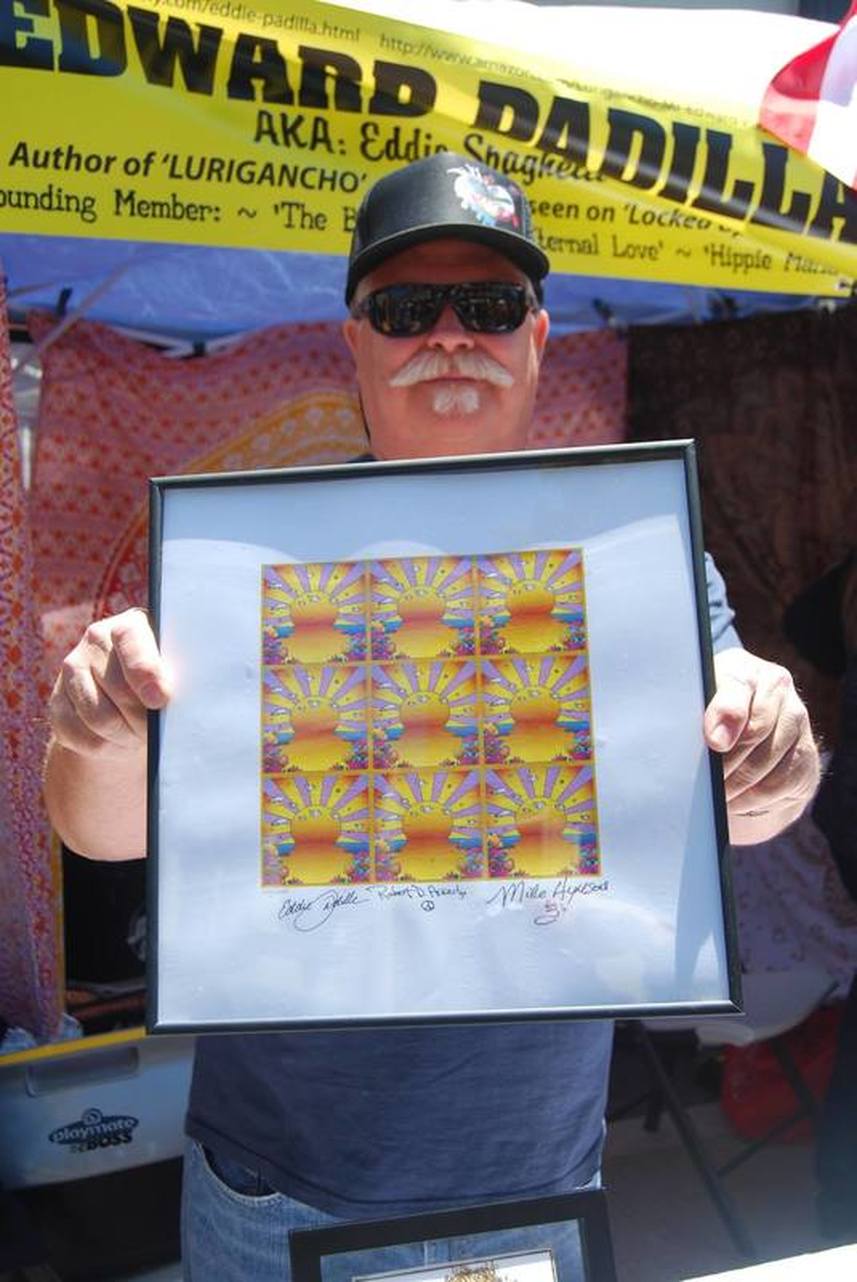 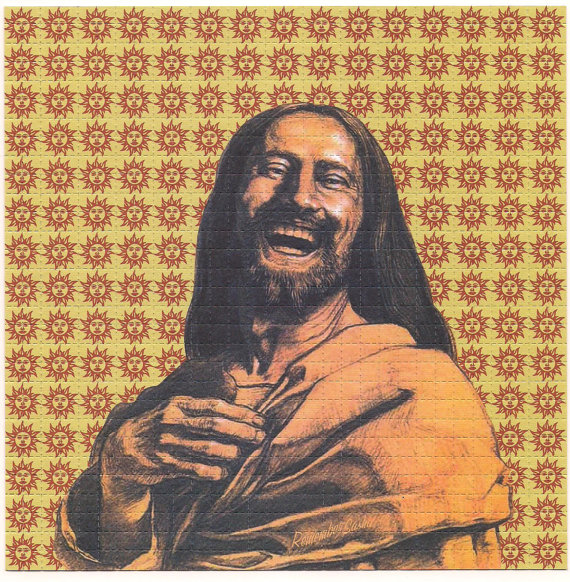 Sasha Shulgin was the person who gave members of "THE BROTHERHOOD OF ETERNAL LOVE" the formula to make Orange sunshine LSD and MDMA back in 1966. Without SASHA there may have never been any thing like it ever made. This is a high quality blotter made with the best ink and paper on a offset press. {NOT A LASER JET PRINTER} and is 7 1/2 X 7 1/2 in mint condition. Look close to the bottom of Christs robe. "REMEMBER SASHA" This Sheet Has Not Been Near or Dipped in Any Drug.

Author’s correction: A more careful examination of Nick Sand’s comments at the MAPS testimonial dinner for Anne and Sasha Shulgin reveals that I was mistaken in my understanding of Sasha’s exact involvement in the development of the Orange Sunshine synthesis of LSD by Owsley, Nick Sand, Tim Scully, and the Brotherhood of Eternal Love. While telling the audience how he (Nick Sand) had had "a synthesis for LSD" that was challenging and then talking about getting "a synthesis" from Sasha, which allowed his LSD project to go forward, Nick then says that the Brotherhood gave him "a synthesis" that they'd adapted from Sasha's research and that “with that [synthesis] I was able to make production amounts of DOM to raise the FUNDS to make the orange sunshine project happen."
http://www.maps.org/videos/source2/video13.html

Apparently the precursor restrictions that come as the result of LSD being made illegal had resulted in a steep increase in the price of precursors and well as a limited availability, and the Brotherhood of Eternal Love simply didn’t have the funds to manufacture LSD like they wanted. But as Nick states the manufacture of DOM (sold on the streets as STP) generated the funds required for the Orange Sunshine LSD synthesis, making Sasha’s role in the whole affair much more peripheral and limited than I previously stated. Nor does it seem likely there was any direct connection between Owsley and the Brotherhood and Sasha himself, since when Owsley was arrested in late 1967 for 100 grams of LSD and a quantity of DOM in 20mg pressed pills — and apparently oblivious of the fact that this was amount two to six times too potent— Owsley placed the blame back on Shulgin. “He had this stuff, and we thought it might be good. It turned out it wasn’t.” 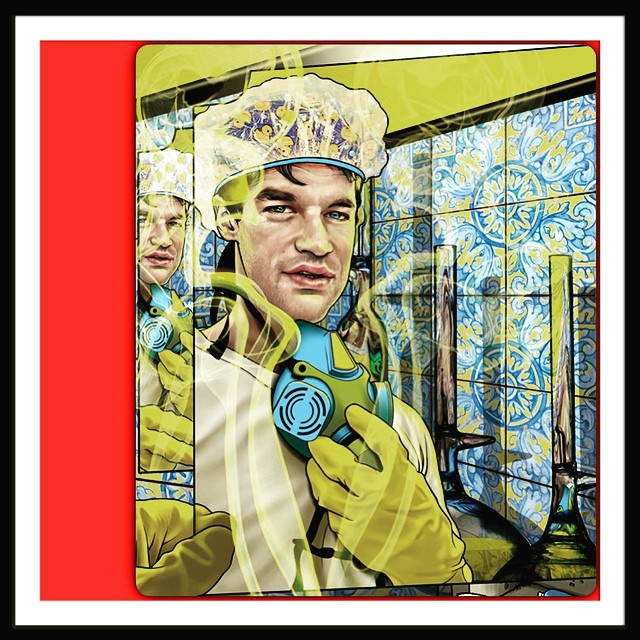 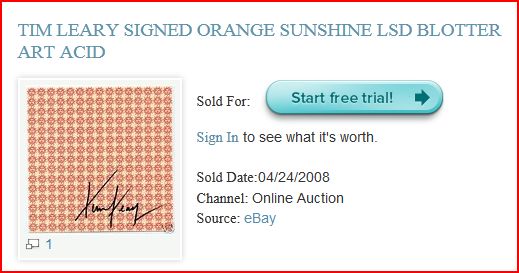 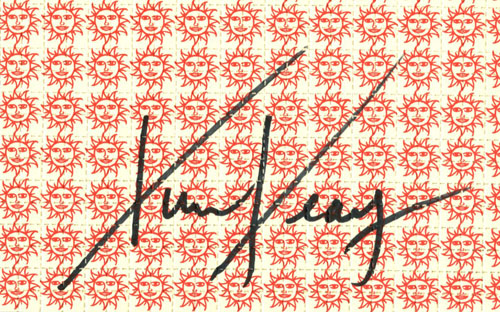 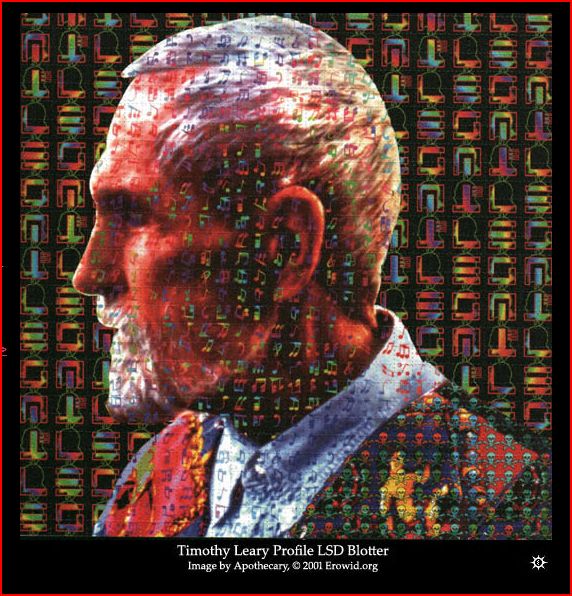 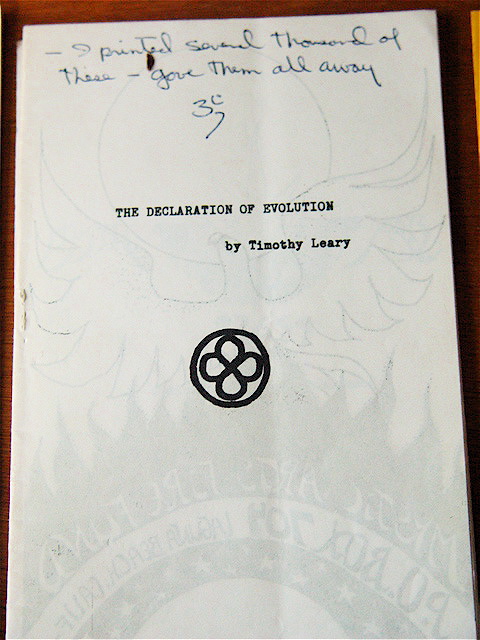 Special thanks to all those who have helped keep not only the story
but the spirit of the Brotherhood of Eternal Love alive through the years.

(c) 2015, Edward Padilla; All Rights Reserved
Educational Site
spagedward@hotmail.com
This site doesn't advocate the use of any illegal substances.

Fair Use Notice
This site contains copyrighted material the use of which has not always been specifically authorized by the copyright owner. We are making such material available in our efforts to advance understanding of environmental, political, human rights, economic, democracy, scientific, and social justice issues, etc. We believe this constitutes a 'fair use' of any such copyrighted material as provided for in section 107 of the US Copyright Law. In accordance with Title 17 U.S.C. Section 107, the material on this site is distributed without profit to those who have expressed a prior interest in receiving the included information for research and educational purposes. If you wish to use copyrighted material from this site for purposes of your own that go beyond 'fair use', you must obtain permission from the copyright owner.